Thirty years experience of writing about sport across multiple platforms.

A bit of frost and a smattering of snow and then, yes, it’s time for the arrival of those rare National Hunt birds; the ‘Jumpers' Bumpers’. A lot of punters may well swerve these curious races, perhaps rightly believing that most of the runners are just having a day out to sharpen their fitness for when the ‘real’ races return. That may well be true to an extent but there are winners to be had if we can work out these unusual conundrums.

Jumpers' Bumpers haven't been required since 15th February 2021 but with the recent spate of abandoned National Hunt meeting it looks increasingly more likely that we might see this type of racing reappear in January 2023.

We have added some stats below which we hope you will find helpful but if you are still unsure who to back why not have a look at who the OLBG expert tipsters are backing.

‘Jumpers' Bumpers’ races date back as far as 2010 but finding any useable data about such races is not straightforward and the information I have found has come from the excellent Horseracebase website.

So, where to begin? Each ‘Jumpers' Bumper’ has a slightly different set of race conditions and therefore a differing pool of horses who are eligible to run. It’s always worth familiarising yourself with the different conditions so you feel confident that all the runners come from fairly similar backgrounds.

The next area to be aware of is how the respective trainers approach these races. Below is a table of all currently licensed trainers who have had more than two winners in ‘Jumpers' Bumpers’:

Perhaps unsurprisingly Nicky Henderson tops the numerical table with 15 wins from 47 runners for a strike rate of just under 32%. Anyone backing all of Nicky’s runners in these races would have made themselves a 9.54 level stakes profit at SP (slightly more if betting to Betfair SP). Before punters start raiding their piggy banks to get behind any Henderson runners it is worth mentioning that 12 of the 21 horses of Henderson’s that have started favourite have been beaten.

A more surprising name on our winners list is Brian Ellison with 12 victories. Ellison has done particularly well at Newcastle where he has had 5 winners from 26 runners.

Next on the list of numerical winners are: Paul Nicholls (10), Warren Greatrex (9), Donald McCain (8), Dan Skelton (8)and Rebecca Menzies (8). Nicholls, Skelton and Greatrex have returned a level stakes profit despite numerous runners but Donald McCain fans would be out of pocket following that trainer despite his eight winners.

Rebecca Menzies who has also had eight winners in these unusual races in a very short space of time. Not only has Menzies sent out eight winners at odds of 7/4, 5/2, 5/2, 9/2, 11/2, 11/2, 16/1 and 20/1 but she has also had placed horses ar 33/1 and 100/1! Menzies was formerly assistant trainer to master tactician Ferdy Murphy and the Sedgefield based trainer has obviously learnt well when it comes to successful placing of her horses.

Harry Fry's runners need to be particularly noted as the Dorset based trainer has had five winners from just 10 runners for a whopping level stakes profit of 63.5. That figure has been skewed by the victory at 40/1 of Presenting Arms at Kempton in 2014 but even without that he would still be over 23 points in profit.

Gary Moore had been top of our 'cold' trainers list but has suddenly found the key to winning 'Jumpers' Bumpers'. Despite running former Champion Chase winner Sire De Grugy in a JB, the first 18 horses Moore ran in these races did not return any winners. Since then though four of his last nineteen runners have won and Gary Moore is now very much on the trainers to follow list for 'Jumpers Bumpers'.

Jumpers Bumpers - Trainers To Be Wary Of?

So, we now know the trainers to keep an eye out for but are there any we should be looking to avoid? Obviously, we are dealing with quite a small sample size, but the following trainers would normally be expected to have a better return than the figures below: 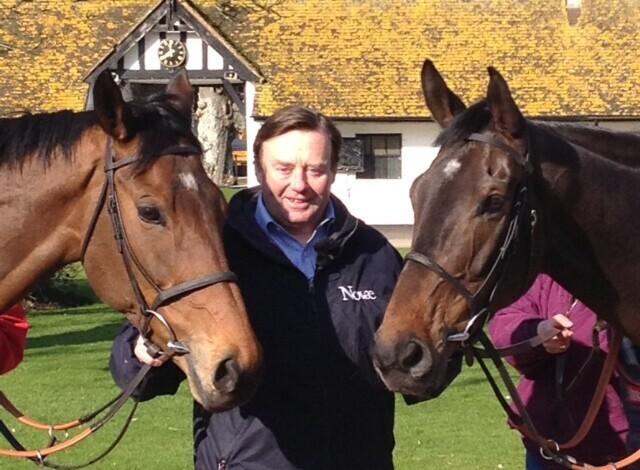 Nicky Henderson had the first ever winner of a Jumpers’ Bumper race when Blue Monster and AP McCoy got the better of Dark Lover (Nicholls/Fehily) by a head on the 21st of December 2010.

The former Champion Trainer has had the most winners of any trainer in Jumpers’ Bumpers (fifteen) from fifty four runners and shows a small profit (£2.54) overall. However with an Actual over Expectation (A/E) statistic of under 1 and his last eleven runners all being beaten it might be worth taking a cautious approach to any Henderson runners in these races, especially as there can be a tendency for runners from this yard to be overbet.

Look out for any stable stars that show up though as Henderson is not frightened of running some of his better horses in these races with the likes of three time Champion Hurdle runner-up, My Tent Or Yours and Grade One hurdler and chaser, Oscar Whisky both winning a Jumpers’ Bumper.

Henderson's win percentage overall in the last ten completed National Hunt seasons is 23.84% so his Jumpers' Bumpers runners at Kempton are overperforming, albeit from a relatively low sample size.

The majority of Henderson's runners in this sphere tend to go to Kempton which is around a one hour tweny-five minute journey from his Seven Barrows stables in Lambourn. Lingfield and Wolverhampton are only around thirty minutes further away but it is a ten hour round trip to Gosforth Park so punters should look closely at any runner Henderson feels is worth the long journey to Newcastle.

As mentioned above, Henderson had the first ever winner of a Jumpers' Bumper race when Blue Monster won at Kempton in 2010. That horse went off at 10/1 but since then only three of his fifty-three runners has returned an SP in double figures with twenty-three of his runners being sent off as some kind of favourite (43%).

Eight of Henderson's JB runners have started at an SP of odds-on, with five of those winning for a small level stakes loss (-0.84).

If it is no surprise to see Nicky Henderson at the top of the table for most winners in Jumpers' Bumpers, it may be a bit more of a shock to see North Yorkshire trainer Brian Ellison in second place.

Brian Ellison is based in Malton, North Yorkshire and, as you can see from above, travelling to any of the Jumpers' Bumpers tracks is a bit of a trek. In National Hunt racing, Ellison is running at a win rate of just under 15% but the table above illustrates a far higher win percentage at all of the tracks Ellison has had a winner at so, it would seem, Jumpers' Bumpers appear to be races that Ellison actively targets.

Nico de Boinville was interviewed at one of the last JB's meetings after guiding a Nicky Henderson horse to victory and he admitted that he and the other jockeys were still getting used to riding in these type of races. De Boinville went on to say that judging the pace required was particularly difficult. With that in mind it might be worth looking at the jockeys who have previously had more than one success in'Jumpers' Bumpers':

The first thing that becomes apparent is that the jockeys who are winning the most tend to be the older, more experienced jockeys. Now retired jockeys such as Noel Fehily, Tony McCoy and Barry Geraghty also all had considerable success in these races so, perhaps, it might be worth giving your selection an extra tick if the jockey engaged has plenty of experience.

Daryl Jacob caught the eye when giving Black Kalanisi a well-judged ride when winning at Lingfield. Horses partnered by Jacob in these races should be viewed positively.

It's also noteworthy that Dougie Costello features near the top of our winners' table. Costello retains his NH riding licence but has been predominantly a flat jockey since 2013. For that reason alone Costello will have had much more experience of riding on the all-weather so he (and any other dual purpose jocks) would be a significant advantage.

Good luck with your bets in 'Jumpers Bumpers'. If you have any other statistics that may prove useful please do add them below.

Jan 23, 01:44pm
By using this site you confirm you are 18+ and consent to our use of cookies and processing of personal data as set out in our Privacy Policy
Got it!