Football’s Biggest Flops - Which Premier League record signings failed to live up to the hype?

He’s through on goal! He rounds the keeper! This is his time to show the world he’s still got it, that he wasn’t a waste of money, that he can still perform at the highest level!

But then he skews his shot wide of the open goal, and the legend of Fernando Torres continues to fade. The Spaniard is just one of a number of big money signings who haven’t lived up to fans’, and managers’, expectations. His £50m transfer to Chelsea is often regarded as one of the biggest flops in football, but fortunately for him, we’ve found even worse.

We’ve looked at the top five record signings of each Premier League club from the past decade to discover which forwards paid back their transfer fees and who were biggest flops.

If any of them are in your Fantasy Football team this year, it might be time for a rethink…

The best pound for pound players in the Premier League

We’ll start on a positive note. Some players just keep on delivering, making their transfer fees look all the more worth it. Based on the number of goals, assists and man of the match awards they’ve picked up, we can reveal who’s delivering the most for their money. 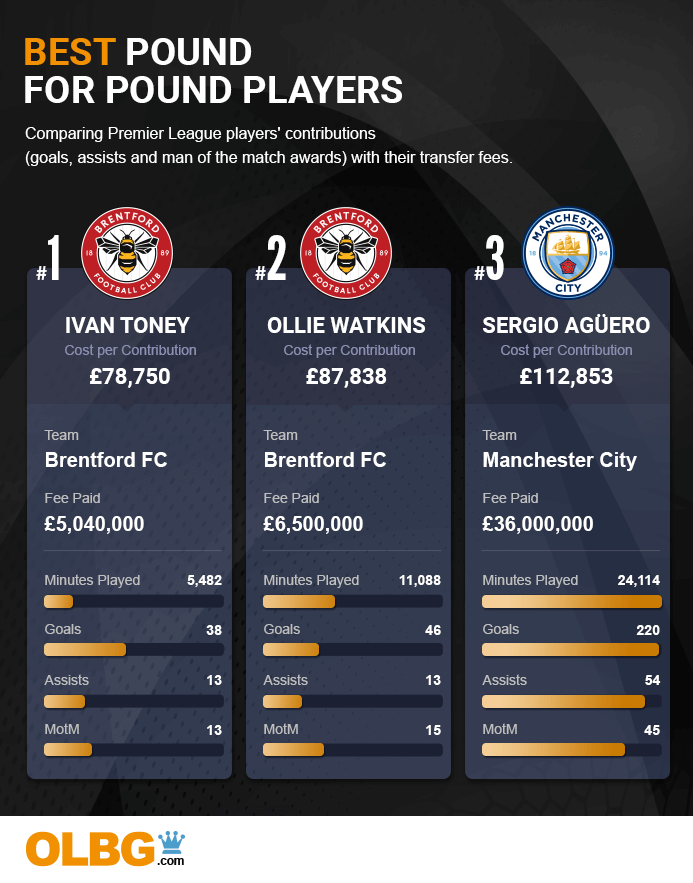 When Brentford signed Ivan Toney for £5 million, nobody was expecting another mercurial striker to help them fight for promotion like Ollie Watkins did. How wrong we were. Notching up 38 goals, 13 assists and 12 man of the match awards, Toney took the reins from Watkins with aplomb to earn his team promotion to the Premier League.

Fact - Aston Villa’s Ollie Watkins was better at Brentford. Ok, when we say fact, what we mean is a fact based on a very specific set of rules, but we still stand by it. Speak to our lawyers, Steven Gerrard!

While at Brentford, Watkins scored 46 goals, picked up 13 assists and walked away with 15 man of the match awards, all for the bargain price of £6.5m, including signing bonuses and sell-on fees. That equates to a very affordable price of £87,838 per contribution, helping Brentford fight for promotion to the Premier League and Watkins earn his first England call up.

He went on to move to Aston Villa for a total of £30.6 million, proving himself to be a very savvy piece of Brentford business.

Quite possibly the best striker the Premier League has ever seen, Kun Agüero certainly didn’t arrive at Manchester City for a pittance, costing the club £36 million for his services. By the time he’d left, however, he’d racked up 220 goals, 54 assists and 45 man of the match awards, a value of £112,853 per contribution. You could say he paid back his transfer fee and thensome.

Agüero is also a Premier League record transfer with the most staying power, having played 24,114 minutes of football for City. That’s approximately 4000 more minutes than Roberto Firmino and Raheem Sterling!

Let’s be honest, if he had only scored that one goal his contributions would have still been worth every penny.

Say it with me… AGUEEEEEEEERRROOOOO!

The best value players for their transfer fees

The worst pound for pound players in the Premier League

Ok, now onto the stuff you came for. The players who promised so much but delivered so little. Those who convinced managers to splash the cash on them, before poor performances led to dwindling goals, frustrated fans and a price tag that is unlikely to be paid back.

We give you football's biggest flops. 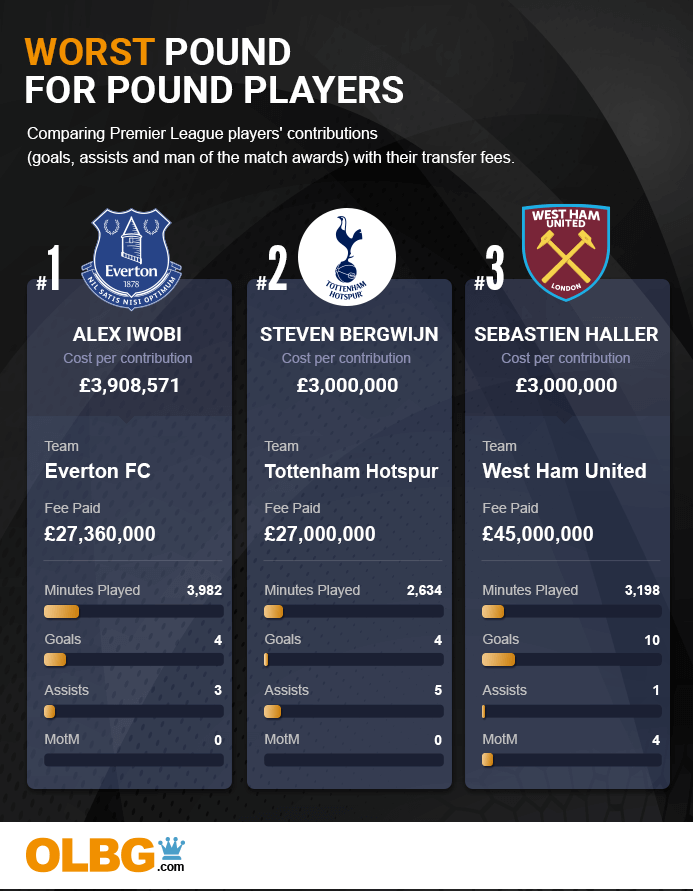 Alex Iwobi costs Everton £3.9m for everything he does

For every flop Arsenal bring in, they send another one out. There were high hopes for Alex Iwobi when Everton signed him for £27.3m back in 2019, with many seeing him as one that got away. A product of the Arsenal youth system, he’d gone on to make 100 appearances for the Gunners, showing occasional glimpses of the tricky wing play that got fans excited. But he never settled in the Arsenal first team, and when Everton brought him in many thought this could be his chance to shine.

Sadly, it’s yet to happen. Iwobi’s only managed four goals and three assists in his time at Goodison, costing his club £3.9m for everything he’s done so far.

But then again, if Rafa Benitez can make Dirk Kuyt look good, maybe he can do the same for Alex.

Steven Bergwijn cost Spurs £27m, but is yet to hit his heights

Bergwijn has hardly set the world alight since arriving at the imaginatively named Tottenham Hotspur Stadium, managing 2,634 minutes on the field but only 4 goals and 3 assists.

Spurs’ fans will be hoping for more, as they continue to try and break into that elusive top four. Bergwijn has cost them £3 million for every contribution so far, making it even harder for the club to afford to keep Harry Kane for another season.

Sebastien Haller can do it in Amsterdam, but not West Ham

Hammer’s fans were naturally delighted when they signed Sebastien Haller from Eintracht Frankfurt for £45 million to inject some much-needed goals into their side. Unfortunately for them though, it didn’t quite work out that way.

Haller scored just 10 goals in 3,198 minutes for West Ham, which works out as a goal every 320 minutes. Patience thinned as they couldn’t afford to wait three and a half games for him to knock out a goal, so Haller had to be moved on.

This is a decision they may regret, though, as Haller has found his form again at new club Ajax and has currently doubled his goals total for West Ham, having played 12 fewer games so far. Always the way…

The Premier League’s most expensive failures

This season’s most valuable transfers

The 2021/2022 premier league season has seen some big signings, but arguably, it’s the ones who flew under the radar that are proving the most valuable.

It’s always the ones you least expect…

Burney have never been known to be a high-scoring, swashbuckling outfit but they broke the mould when they signed Cornet from Lyon for £13.5 million and it’s paying dividends!

Already racking up 6 goals and assists in just 677 minutes, he’s managed a goal contribution every 113 minutes! Sean Dyche will be delighted with the buy as he tries to steer his team through a relegation dogfight - though the upcoming African Cup of Nations could see him miss up to 8 games…

Jadon Sancho is this season’s biggest transfer flop so far

We all know Jadon Sancho is a very good footballer. So why has he not been a very good footballer for Man Utd? The Man City youth product was unstoppable in the Bundesliga, scoring 38 goals in 104 appearances for Borussia Dortmund and earning a call up to the England’s Euro 2020 squad. However, his £76.5m signing by Man Utd is yet to really work out.

Maybe the system isn’t right for him. Maybe he’s being played out of position. Maybe he just looks bad next to Christiano Ronaldo. Whatever it is, in his debut season in the Premier League he’s only managed two goals and not a lot else, costing the Red Devils £38.25m a pop.

We all know he’s better than that, we’re just waiting for him to prove it.

Jack Grealish has only scored two goals for £105m

Another England youngster who is definitely better than his stats suggest, Jack Grealish became the most expensive English player in history when Man City signed him from Aston Villa for £105m. For that sort of money, you’d expect bigger returns, a pressure that is no doubt playing on Jack’s mind whenever he steps out onto the pitch.

While his performances have by no means been bad, it’s the end product that’s been missing so far, with only two goals and three assists coming in 1,323 minutes of football. In a team as full of talent as Man City, they’ll expect much more from an output of £21.15m for every contribution.

Come on Jack, you’re the future of English football!

Some clubs love to spot a good deal. They have a nose for the uncovered stars of the future, a keen eye for potential, and a wallet that frankly stops them spending any more than they absolutely have to.

But which current Premier League side is the savviest of all? We’ve found out so you don’t have to!

Arsenal are the Premier League’s best spending side

Given their recent history (and club record signing of Nicolas Pepe) many would be surprised to see Arsenal at the peak of this list, but when you look into their stats, you see they have an eye for a goalscorer.

While their average spend is around £46 million, their forwards typically cost them a measly £615k. You can thank Alexandre Lacazette, Alexis Sánchez and Pierre-Emerick Aubameyang for that!

Manchester United ranked worst for earning bang for their buck

If you were to say “Manchester United and big-money forwards don’t mix”, you’d probably be right. Their top five record signings have been less than impressive, considering their hefty price tags.

While they are the second biggest spenders on average in the Premier League, averaging £61 million per forward, they’re dead last when it comes to the value those players provide. Goals, assists and man of the match awards cost them approximately £9.5 million apiece…

Liverpool’s past indiscretions let them down

You typically think of Liverpool as being smart when it comes to buying forward players. Though, despite having three of the most cost-effective players in the top ten in Mo Salah, Roberto Firmino and Sadio Mané, Liverpool sit fifth in the spendthrift table. You can thank the signing of Christian Benteke for that.

While their electric front 3 has done a lot of the heavy lifting to get them where they are, the poorly-thought-out signing of Benteke as a replacement for Luis Suarez (yes, really) for £54 million (yes, really) ended up costing them almost £3.5 million for every contribution he made.

Don’t bet on a flop this weekend

OLBG is here to help you find the best bets. Compare all our top football betting tips for the games ahead, and choose the best betting sites to bet with. Whatever you do, avoid putting any money on Joelinton.

Data on minutes played, goals, assists and man of the match awards has been taken from Whoscored for all matches played for that particular team, including cup games.

If data was unavailable/limited for a record signing - due to them playing before 2008 - the next highest fee forward was selected. Ie, in the case of Robbie Fowler being ineligible for Leeds United.

Best & Worst pound for pound players are ranked by Cost Per Contribution for players who have played more than 2000 minutes for their club.