We all know that there’s a lot of money in sport, but just how rich do you have to be to own your own top-tier sports team? Having previously identified the wealthiest sports club owners in 2020, we at OLBG wanted to update the data to find out how things have changed. We’ve scoured the top sporting leagues across the most popular sports including NFL, NBA, NHL & MLB to find the 100 richest sports club owners.

Just how wealthy are the owners of our favourite sports clubs?

We all know that there’s a lot of money in sport, but just how rich do you have to be to own your own top-tier sports team? Having previously identified the wealthiest sports club owners in 2020, we at OLBG wanted to update the data to find out how things have changed.

We’ve scoured the top sporting leagues across the most popular sports including NFL, NBA, NHL & MLB to find the 100 richest sports club owners.

The chart above rounds the figures up to Billions and below the wealth column in the table is the number of millions - yes That is steve Balmer with 95,700 MILLION dollars!

Despite seeing his net worth grow by $23.2 billion, our previous richest sports club owner, Mukesh Ambani, is now the second wealthiest in the world with a total wealth of $94.7 billion, which is approximately $1 billion less than Steve Ballmer. While Ambani’s cricket team, the Mumbai Indians, won both the 2019 and 2020 seasons of the Indian Premier League, they only managed to reach 5th place in 2021, showing that money can’t always guarantee success on the field.

In third place, we have the richest person in Mexico and formerly the world’s wealthiest individual, Carlos Slim. Slim owns second division Spanish football team Real Oviedo through his global conglomerate Grupo Carso. His financial worth currently stands at $80.9 billion, up by $30 billion from when we last conducted this study in 2020!

David Thomson is the richest owner of a hockey team with a net worth of $50.5 billion, earning him a 4th place spot in our ranking. His two teams, the Winnipeg Jets and Manitoba Moose are both based in Winnipeg, Canada, and compete in the NHL and AHL respectively.

The wealthiest owner of a French football team is Francois Pinault, whose club Stade Rennais FC competes in Ligue 1, the top league in France. His net worth stands at $43.5 billion in 2022.

Dietrich Mateschitz is the wealthiest owner of an American Major League Soccer team, having acquired the then named “MetroStars” which were rebranded as the New York Red Bulls. Mateschitz’s interest in sports ownership also extends to German and Austrian football, counting FC Red Bull Salzburg and RB Leipzig among his acquisitions, as well as the Red Bull Racing Formula One team. In sixth place overall, Dietrich Mateschitz has a combined wealth of $28.5 billion.

The richest owner of a Premier League football club is Sheikh Mansour, who owns Manchester City and is worth approximately $22.9 billion or just over £17.4 billion. Mansour is not only incredibly wealthy but is also the Deputy Prime Minister of the UAE and is a member of the Abu Dhabi royal family. He is also the owner of three other football teams from across the world; Melbourne City FC, New York City FC, and MumbaiCity FC.

In eighth place is Daniel Gilbert, owner of the Cleveland Cavaliers basketball team, who is worth $21.6 billion.

Meanwhile, Ann and Stanley Kroenke claim ninth place with a net worth of $19.8 billion and own five separate sports teams including the Premier League’s Arsenal FC and the NFL’s Los Angeles Rams.

In tenth place is Mohammad Bin Salman, responsible for the recent acquisition of Newcastle FC. This takeover divided fans of the club due to the influence of oil money on the sport, as well as controversy over the human rights record of Saudi Arabia whose government’s sovereign wealth fund is the official majority owner of the team. As the Crown Prince and Deputy Prime Minister of Saudi Arabia, among holding other important government positions, it should come as no surprise that Mohammad Bin Salman is among the wealthiest sports club owners, with a reported net worth of $18 billion.

Steve Cohen is the wealthiest owner in baseball, having acquired a 95% stake in the New York Mets from the Wilpon family in 2020 for $2.75 billion. Cohen currently ranks as the 11th wealthiest sports club owner with a net worth of $17.4 billion.

Also in the list are owners who have made their money from betting sites and online casinos. The Coates family, owners of Stoke City, also own the Words Largest Sports Betting Company, bet365.  Tony Bloom, the owner of Premier League football team Brighton, has recently become a little richer after his racehorse won a major race at the Cheltenham Festival. He reportedly collected over £500,000 on his bets and a further £250,000 in prize money. Bloom has owned Brighton since 2009, previously winning more than $1,500,000 as a professional poker player as well as making money from online gambling companies. 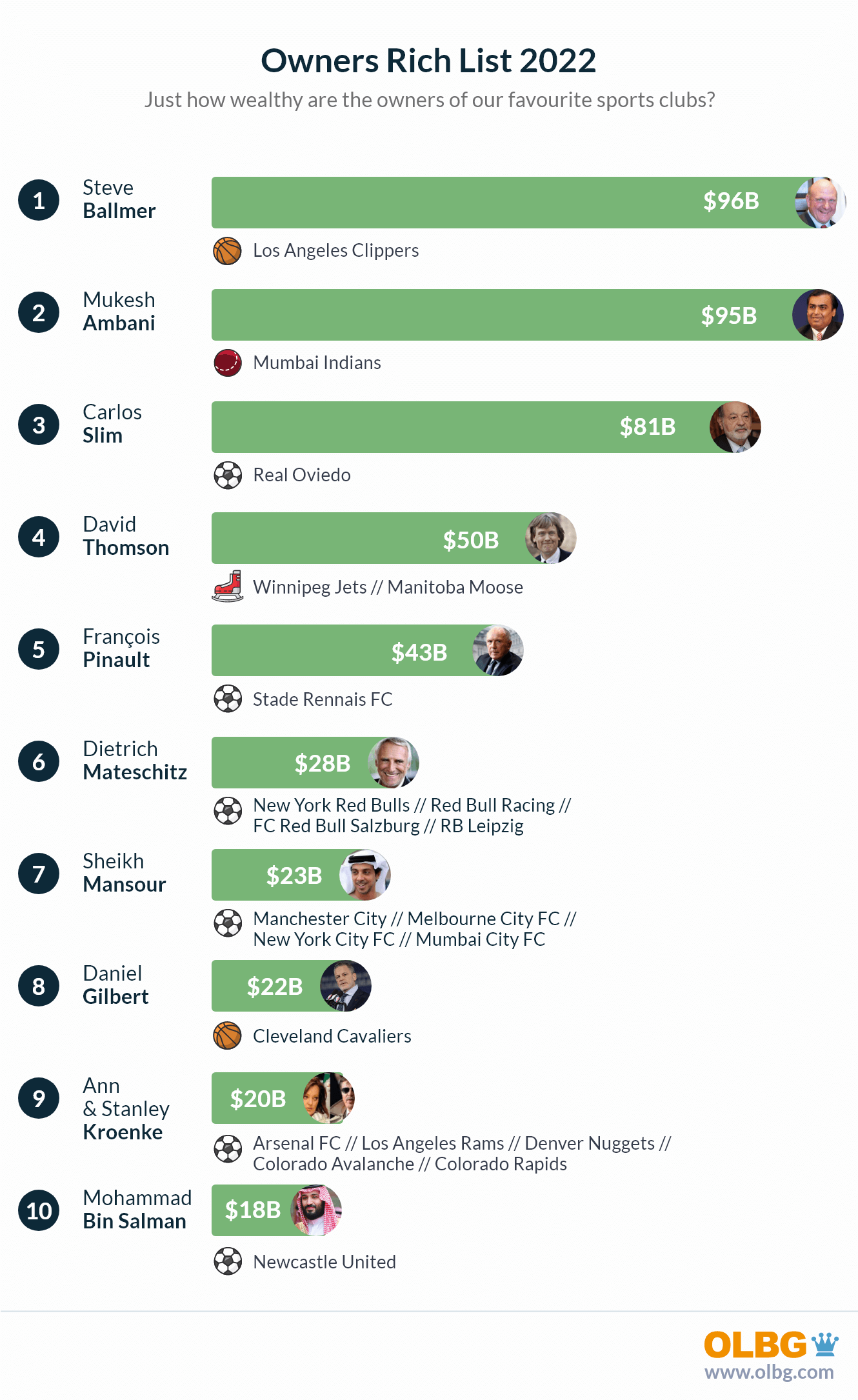 We wanted to update our 2020 data to reveal the wealthiest sports club owners of 2022. We used data from Forbes billionaire rankings as well as other sources where this was not available and checked through our 2020 data to update the figures. We then supplemented this by checking the owners of major clubs across the most popular sports to ensure we didn’t miss any wealthy owners.

Data was collected on Friday 18th of March, 2022, with currencies being converted on the same day from USD to GBP. We used exchange rates from Xe.com to convert the currencies.