The Apprentice Betting Odds: 69% Chance Akeem Bundu Kamara will be Fired This Week

We love the Apprentice and in particular, the no holds barred entry to the series with the first candidate to be fired coming right in the first episode.

Harry Mahmood's time on the show was cut short when he was the first to be fired in the boardroom, and those that accompanied him in the boardroom have been given little hope of survival according to our poll on who will be getting in the taxi next.

The Apprentice Next Elimination Betting Odds*

What are the chances of who will be next to be shown the door from the boardroom by Lord Sugar?

*Betting on the Apprentice is not available as it is a pre-recorded show and the results can be already known. We have created betting odds based on an independent poll of apprentice fans as to who they think will go next. 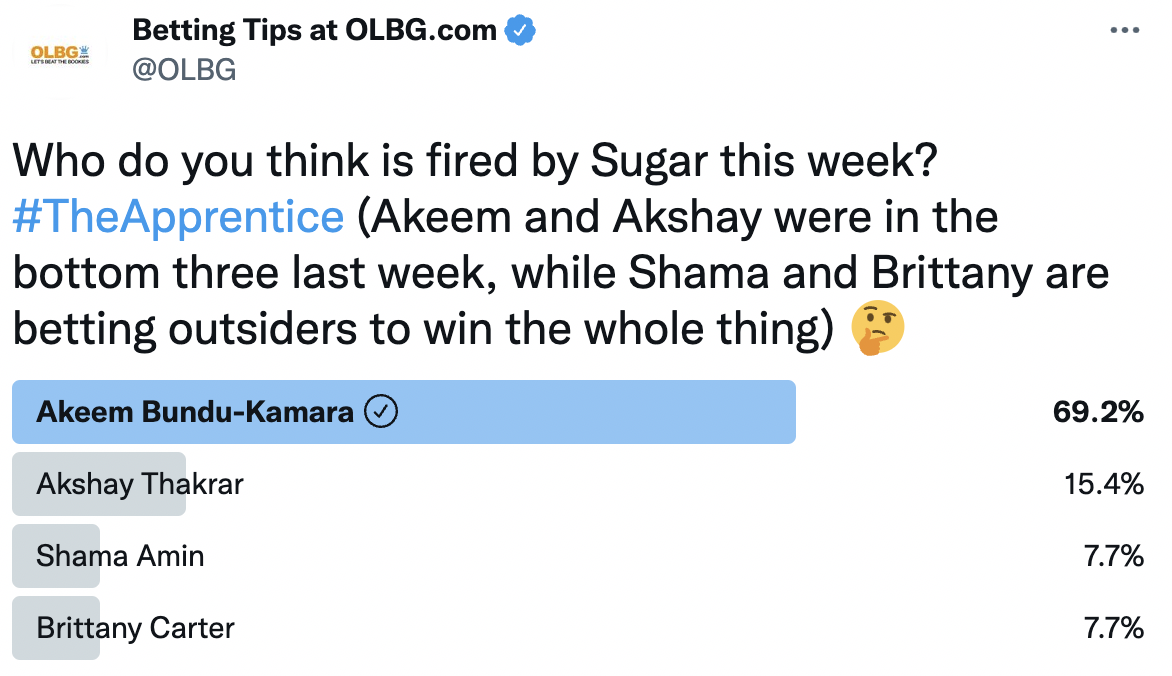 The results of the poll have pulled in two boys from last week's losing team including Akshay who was the defeated project manager, whilst there is speculation the girls may struggle this week, and the two girls with the smallest chance according to the pre show betting odds have been highlighted understandably.

Akeem was already one of the outsiders at 14/1 but a defeat last week, he just survived but off the back of that, his odds have drifted from 14/1 to 20/1 to be the show winner and now odds on favourite to go if he is on the losing team this week.

Who is for the chop?

Let's take a closer look at those picked in the poll

Akeem was a strategy manager for a financial firm and is 29 years old. According to the Daily Mail he has an ethical sportswear firm and was brought into the boardroom to face Lord Sugar as part of the losing team in week 1 by project manager Akshay Thakrar, who may have got lucky and pulled a stroke of survival by pulling Akeem in.

Project manager of the losing team in week 1, Akshay is a digital marketing agency owner from London and is 28 years old. never a great start to be the first in charge to lose, Akshay survived although to be fair he was nominated by the boys to lead up but then took the bull by the horns and seemed to be making all the decisions

Shama owns and runs a children's day nursery and the 41-year-old is from Bradford. She was the biggest outsider of the girls in the betting before the show began, and is the second eldest contestant on the show after Ay Anzel

Front of house hotel manager Brittany is just 25 years old and from Bristol and with the discovery of the registration of a fitness brand limited company appearing just a week before the first show launched, speculation is rife that, she may not last the entire series.

Let's take a look at what chances we think each contestant has now and how their odds have changed from last week based on who was fired, the weekly poll.

Harry has been removed following his firing and Akeem has seen his price rocket to 20/1 after being 14/1 last week.

Francesca Kennedy still showing as favourite in the betting odds for Week 3 of The Apprentice after a strong win as Project Manager in the Toothbrush task last week.

*Betting on the Apprentice is not available as it is a pre-recorded show and the results can be already known. We have created betting odds based on an independent poll of apprentice fans as to who they think will go next.