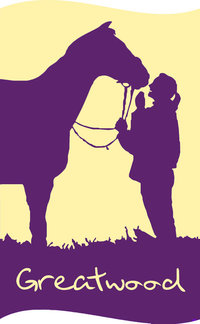 Greatwood is dedicated to the rescue, rehabilitation and rehoming of racehorses particularly those that have fallen on hard times. Established in Devon in 1990 as a registered charity,  their aim is to provide the racehorses with safe secure and rewarding futures.

Millions of race goers are swept away by the excitement during a race, but does anyone think about the 'also ran' whose career is coming to a close and whose future may be uncertain? A very large number of racehorses leave the racing industry every year and sadly a significant number of these horses fall on hard times through lack of care, understanding, experience, attention and love. Greatwood are a safety net for these horses that have fallen on hard times after their racing days are over. Greatwood see their role is to take in as many as they can, to restore their morale and to retrain them for happy and useful lives in other disciplines. The horses that enter the Charity are rehomed on a foster-loan basis and are monitored regularly in their new home for life.

Why They Need Donations

It is increasingly difficult to raise funds to help these horses who to the public may appear to the public 'elite and cared for' but can be found to be suffering as acute a hardship as any neglected fell pony. Rehabilitating ex-racehorses is expensive (and can cost in excess of £5000 per annum per horse), but the horse could be priceless to the person who cares for it in the end.

The Horseracing Industry has taken significant steps in recent years to help Greatwood, as one of the three centres accredited by the British Horseracing Board, to minimise the problem cases amongst racehorses leaving Racing and gives Greatwood considerable financial support but this is barely a quarter of the costs of the overheads.

Greatwood have discovered over the years that horses out of training need the specialist care they are able to offer. Unless this care is received initially these horses may quickly become unmanageable, and end up in a state of neglect to be sold cheaply at auction. Thus beginning the downward spiral endangering their health and well-being. Sadly this is the route that has been followed by many of the horses before arriving at Greatwood. The implementation of recognised and professional methods in the mental and physical treatment of the ex-racehorse enables them to enjoy an active life in a new discipline for many years. Horses that leave Greatwood are only ever sent out on loan, and are monitored twice yearly. If the standards expected are not upheld, the horse is returned to us.

Why We Are Supporting Them

OLBG.com is passionate for supporting charities such as Greatwood. Many of our members bet and tip on racehorses day in day out, they love the sport and the horses. By supporting Greatwood, as well as giving much needed money to help their work, we hope to raise awareness for the need of such charities which wouldnt be able to survive without donations

To show this support and to raise awareness OLBG.com was the proud sponsor of the Greatwood Open Day on the 2nd of September 2007, with a donation of £4000 and has continued to support the charity with regular £1000 donations since.

For more information about Greatwood, please visit the Greatwood Website

For every £1 donated by tipsters, OLBG will also donate £1 to the fund therefore doubling the donation.