both competitive and open looking races.

i have always though ,there is an advantage to picking a race, if you have studded the race before posting a said race, so being platonic to the race pick , you dont get an advantage etc but for that to happen, you need someone who is not in the contest, to post a race ,each day
also ,if it is a democracy ,what is the matter with the irish racing ,if the fields are to small,in the uk, and personally speaking the more runner in a race the better , given the list of names that are in the contest,( ie less chance of picking the same horse as someone else etc)

Thank you Meoldmate, I have a wedding party tonight and was a bit worried about getting around to picking the race

"Respect is something you must already have, if you want to receive it"

It's difficult to take his last rusult when 5th to the reopposing Brandy McQueen at face value, and is worth giving another chance here. Just a couple of outing earlier won at Hexham 23F albeit only by a hd, but he was beating the 5/6F Your Place. Really stayed on there to get up close home and if in that kind of mood today will have as good a chance as most of his rivals.Trained by James Walton and ridden by Billy Garritty. Possible place prospect.

Already has had seven outings this year and he is trying to complete a hat trick of wins on the bounce here today, having won his last two outings this month, the 11th May, 22nd May, so he's out pretty quickly after just one week, and his current odds make him an attractive ew proposition in his current form. Distance and going are of no concern for trainer David Pipe and 5lb claimer Philip Armson. has and ew shot at ew odds.
"Respect is something you must already have, if you want to receive it"

Kelso 3.57
HALCYON DREAM
This mare steps up from 20 furlongs to 26 furlongs. This long distance for a hurdle race may suit as she is related to the smart Speed Master who won at 26.5 furlongs.
The granddam won twelve hurdle races.
Halcyon Dream's career best effort came on a sharp track (Ballinrobe).
That best run came on today's forecast good going and could be better than it looked as she was noted keeping on over 21.5 furlongs which may have been too sharp.
The stable has saddled recent winners.

Uttoxeter 3.31
CRACKING DESTINY
This gelding has his second outing after a break having twice placed second in these circumstances.
His career best chase run came over half a furlong shorter than today's distance in a better race, a Class 1 Listed Handicap Chase at Wetherby. Cracking Destiny is three pounds lower on official ratings today compared to that Wetherby race. That run was on good to soft ground but he has also run well on today's forecast good going.
Callum Bewley, the last jockey to win on Cracking Destiny, retains the ride. 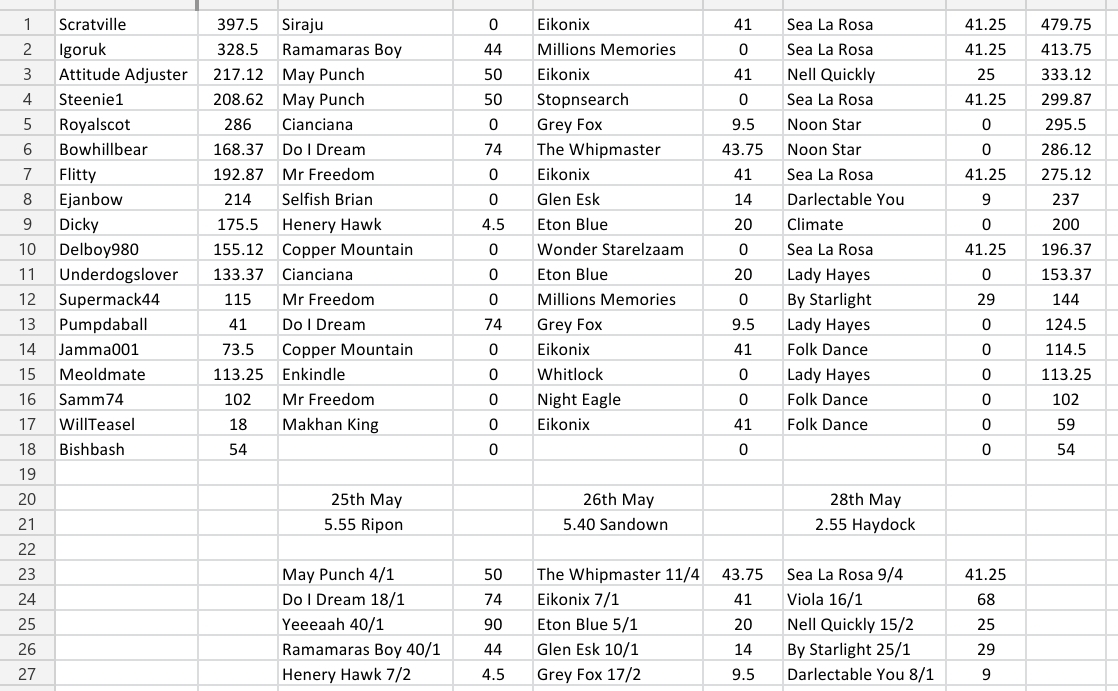 No change at the top as they both Scratville and Igoruk scored almost the same apart from 3 points including both selecting the same winner on the last day, great minds think alike. Attitude Adjuster moved up one place in to 3rd after being the only one to score on three days. Nobody got the 40/1 3rd on the first day giving the highest score of 90 points but Bowhillbear got the 2nd highest which was 74 on the same day.

LISSEN TO THE LADY

A Sandy Watson trained 8 year old whi has had 20 races over the hurdles winning 4 times and has finished 3rd 4 times. She has won 3 times here at Kelso all 3 in class 4 handicap hurdles over 2m 6 1/2f ridden by today's jockey Joanna Watson. She is back in a class 4 handicap over 3m 2f on good going. She finished 4th last year over this distance here at Kelso under a different jockey N Brennan. She finished 4th last time out over this course beaten 11 lengths, she is racing off top weight and is trying this distance for the 2nd time under normal jockey claiming 5 lbs . has an e/w shout in this race today.

3.31U - Barton Knoll
Distance winner who lost on the nod to one of todays rivals Destrier last time out but is better
off at the weights today. Both are turned out again quickly as that run was only 16 days ago.
Seems to act on any ground and looks nicely handicapped with 11st 5lb with only two below
him in the weights, S Quinlan retains the ride.

A Donald McCain trained 8 year old who has had 9 races over the chases winning 5 times and has finished in the frame twice. He won 4 races on the bounce July /Sept last year all, in class 3 novice chases all ridden by today's jockey Brian Hughes. He s in a class 2 handicap chase over 2m 4f on good going, this gelding fell for the 1st time at Ayr in April , and was let down by his jumping last time out, appearing to have lost his confidence . Hopefully has has been schooled again over the bigger obstacles, he is a winner over this distance and acts on the going, has a good shout in this race today.

Brandy McQueen presents the Harriet Graham & Gary Rutherford stable. He has one win to his credit. He achieved it in his last race at Perth on May 11, showing that he feels he is better on the longer stakes courses. The impression is that it is as a stayer that he is progressing. Jockey Craig Nicol is back in the saddle today as he did in the winning race in Perth
Post Reply
339 posts