You read that right: the male Irish sports stars we examined get 3.5 times more online articles written about than our top sportswomen. And yet, readers are engaged with content about our sportswomen; our male athletes only get 2 times more engagement than their female counterparts when it comes to readers liking and sharing content.

OLBG.com took a look into the figures to unearth this disparity between online coverage of Irish sportsmen and sportswomen.

We selected some of Ireland’s top performing sports stars, looking at one female and one male athlete from each respective sport, and examined how well they were covered online between April 2020 and April 2021.

Fact 1: Ireland’s sportsmen had around 240% more coverage online than its sportswomen. 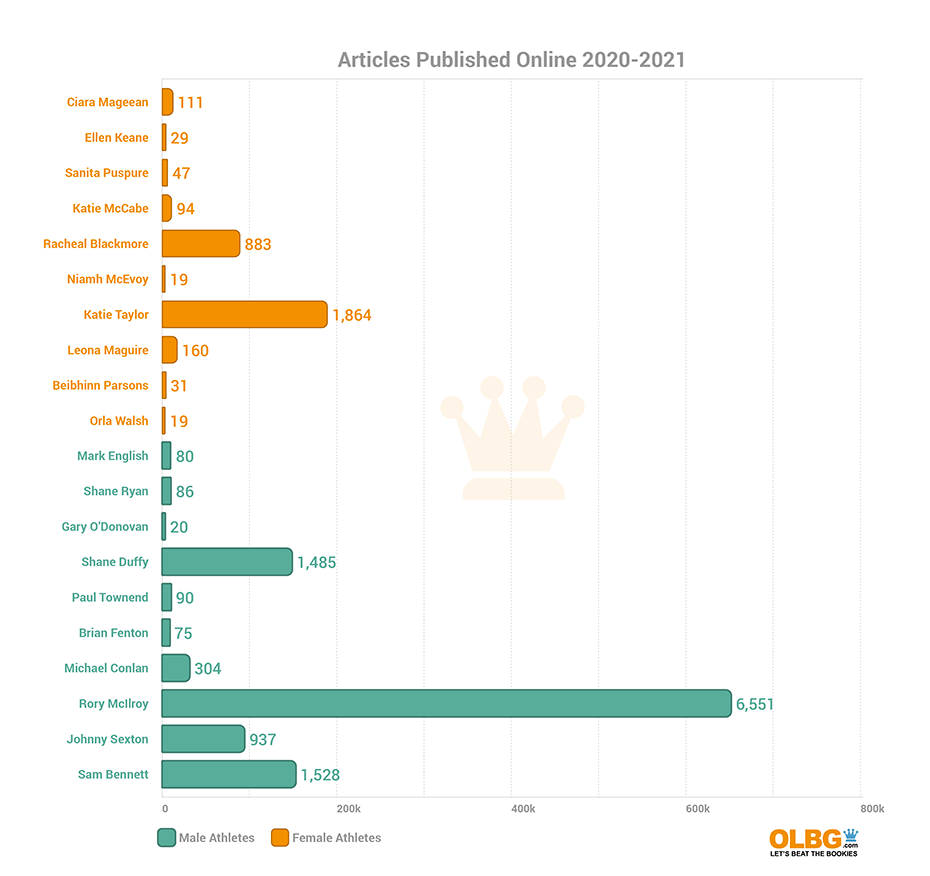 We discovered that there were 11,156 articles written on our top male athletes, and 3,257 written about our top female athletes.

It’s important to note that we’ve excluded Conor McGregor from this list: with such a huge presence both online and offline, he receives so much coverage and engagement that he skews the data entirely. We’ve considered him an outlier in this case.

In this time period, Irish sportsmen got around three times the online coverage than Irish sportswomen. 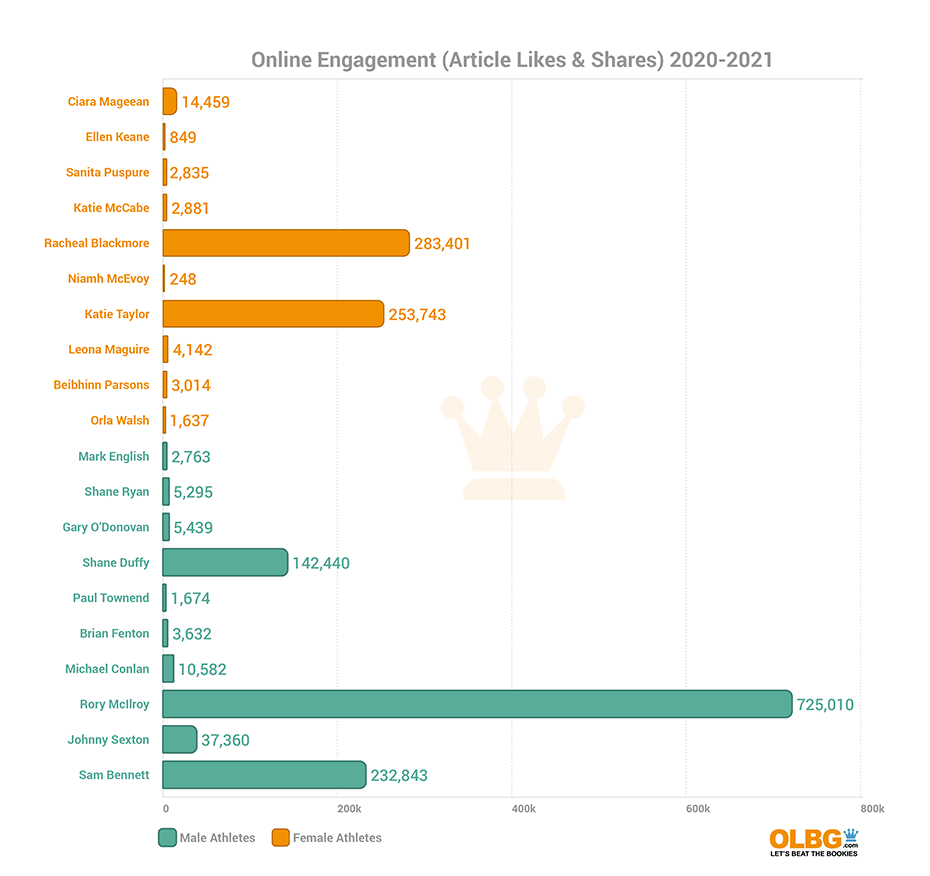 We then looked at engagement figures for the same sports stars and the same timeframe. An engagement refers to a like or share of an online article about the sports star receives.

Because our sportsmen have significantly more coverage online, they got 106% more likes and shares in total; however, one average, women are getting more engagement than men per article.

In terms of engagement, although our international stars once again come out on top, we can see some of our sportswomen are almost getting the same attention online as males are: recent Grand National winner Rachael Blackmore far surpasses her male counterpart, Paul Townend in engagements. Likewise, athlete Ciara Mageean receives significantly more online engagement than Mark English.

People are engaged with women's sports in Ireland.

So how does this translate to social media?

Although women are falling behind in media coverage, many of our female sports stars are taking control of their own publicity by using their social media accounts to build a following - and build their own brands.

Let’s take a look at how social media followings compare between our male and female athletes. 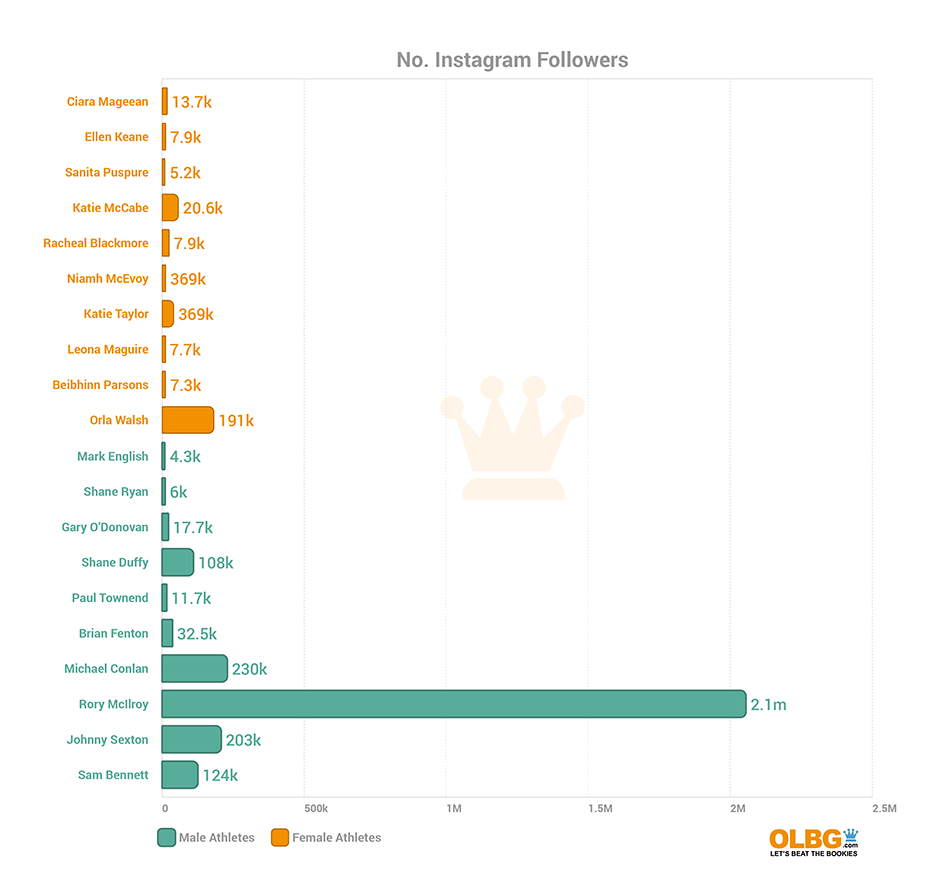 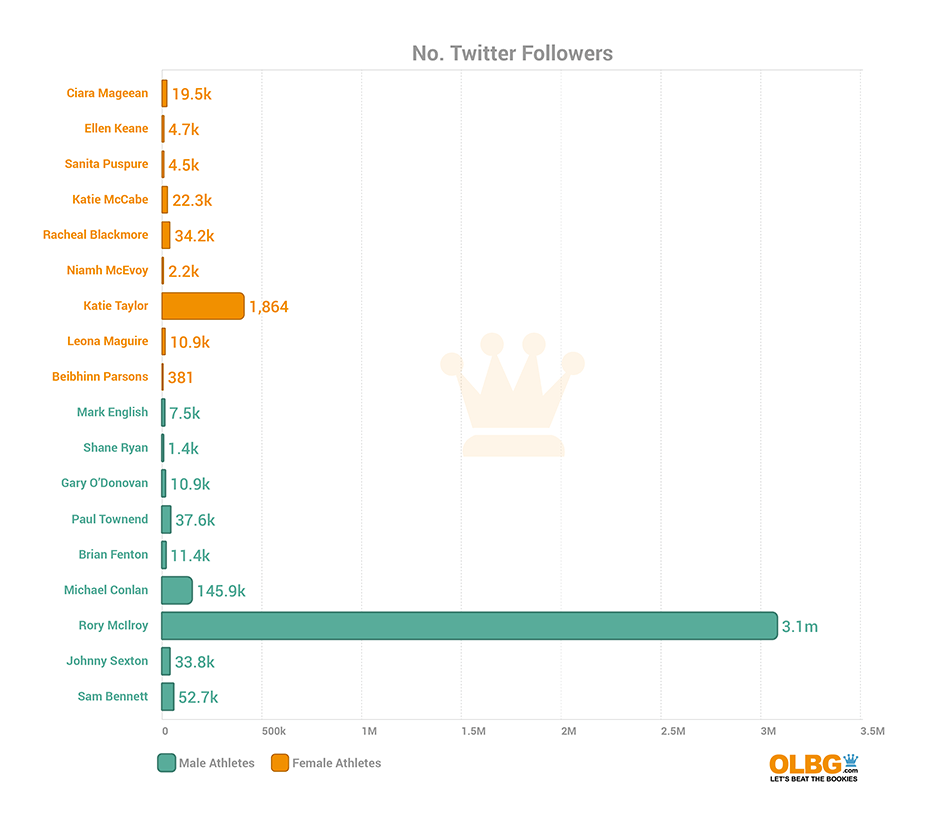 Some of our female athletes are making waves in the social media world, with stars like Ciara Mageean, Rachael Blackmore and Orla Walsh racing ahead of their male counterparts on Instagram and Twitter by actively posting and engaging with their audiences to build their own brands in lieu of media coverage.

Despite this, we do see some of our sportsmen getting far more attention on social media than our female sports stars - Gary O’Donovan, for example, rarely posts on Instagram, and yet has significantly more followers than many of our sportswomen.

The numbers simply don’t add up: with such a huge gap in online coverage, we’d expect to see the same in online engagement, when in fact we see that female athletes aren’t that far behind men when it comes to likes and shares from readers and fans.

The proof is in the numbers: there is plenty of engagement when it comes to women's sports in Ireland; but there’s also plenty of room for improvement in covering them online.

“We at OLBG.com know the importance and influence of online. We are saddened to see the difference in the amount of coverage female and male athletes get, despite having almost the same amount of engagement. As we think that women have long enough been an underrepresented group in sports’ media, we hope that there will be more coverage and promotion of females in sports in the future, especially after this pandemic,” said Richard Moffat, CEO.

Want to know more about why women’s sports fall behind men’s sports in Ireland? We’ve covered the topic in full here.

Read The Story of Irish Women Athletes: By The Numbers