Of the 871 players that are currently listed on hockey reference, 364 of them are proud to display Canadian nationality

Although the NHL has become far more cosmopolitan in recent years, is it still a competition that is rooted within North America. With 25 franchises currently based in the United States and seven in Canada, you would think the majority of players come from the former.

However, that assumption would be incorrect. After carrying out an analysis on each of the 2022/23 season rosters, it is the latter that has the single biggest national representation

Of the 871 players that are currently listed on hockey reference, 364 of them are proud to display Canadian nationality. A figure that equates to 41.79% - or for every five players in the NHL at the time of writing, two of them are Canadian.

While in comparison to the representation that comes from Canada, 243 players are flying the flag for the United States at the time of writing. At 27.9% of the total NHL player pool, just over one quarter represent Uncle Sam.

Were you to add the two percentages together, 69.69% of the NHL’s registered players for 2022/23 would be North American 30.19% would be based within Europe’s vast landmass and 0.12% would be represented by Asia.

Of every seven players that are North American, three of them are European. The biggest individual European representation comes from Sweden with 81 (9.3% players currently plying their trade in the NHL. While Russia and Finland have exported 50 (5.74%) players each in joint fourth.

As for the full breakdown of nationalities, this is displayed in the table below:

Now that we know the breakdown of nationalities, we want to know if Canadian players earn the most money when it comes to salary. After going back to the same hockey reference website and scooping all the current contract data, here is what we found (All figures in US Dollars) 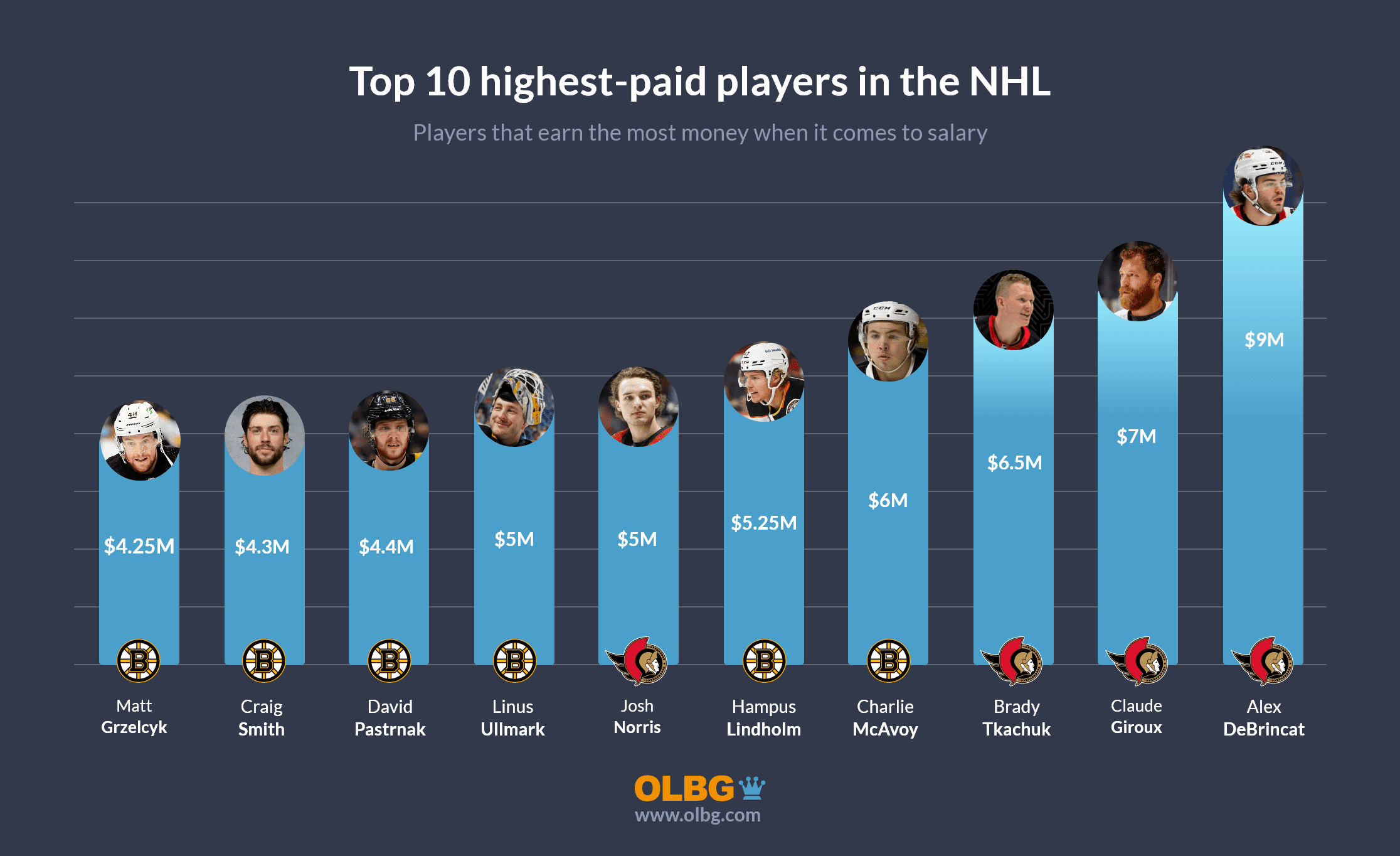 Of the top 10 highest-paid players in the NHL, only one of them has a Canadian passport. However, Claude Giroux will not be complaining all that much, as the Ottawa star earns $7m a year. While that figure means he is the second highest earner in the league at the time of writing.

Surpassing Giroux at the top of the table is none other than Alex DeBrincat. At $9m dollars per year, the fellow Ottawa player is one of a trio of names that represent the franchise at the top, and hot on the heels of these two is Brady Tkachuk who earns $6m.

Looking at the split of the top 10 in terms of teams, there is a duopoly between the Ottawa Senators and the Boston Bruins. The former has four players in the table above, the latter is responsible for six.

Of course, we should not only look at the top 10 in terms of earning power. Where we carried out a nationality split at the beginning of the article, we can also now look at the total earnings per nation.

With Canada having nearly 400 players that are in the NHL at present, it comes as no surprise that they command the largest total earnings. At just short of $735m in one year, the 364 individual stars command an average salary of just over $2m.

If we factor in each nation that provides at least 10 players to the NHL, it is Switzerland that finds itself at the top of the average earnings league. 11 players in total earn a combined $29.7m or $2.7m each.

Full total and average earnings below:

Of course, there is another angle we can look at and this is the Canadian representation by each franchise. If we take each of the 364 players that fly this particular flag, the spread across the 32 is as follows: 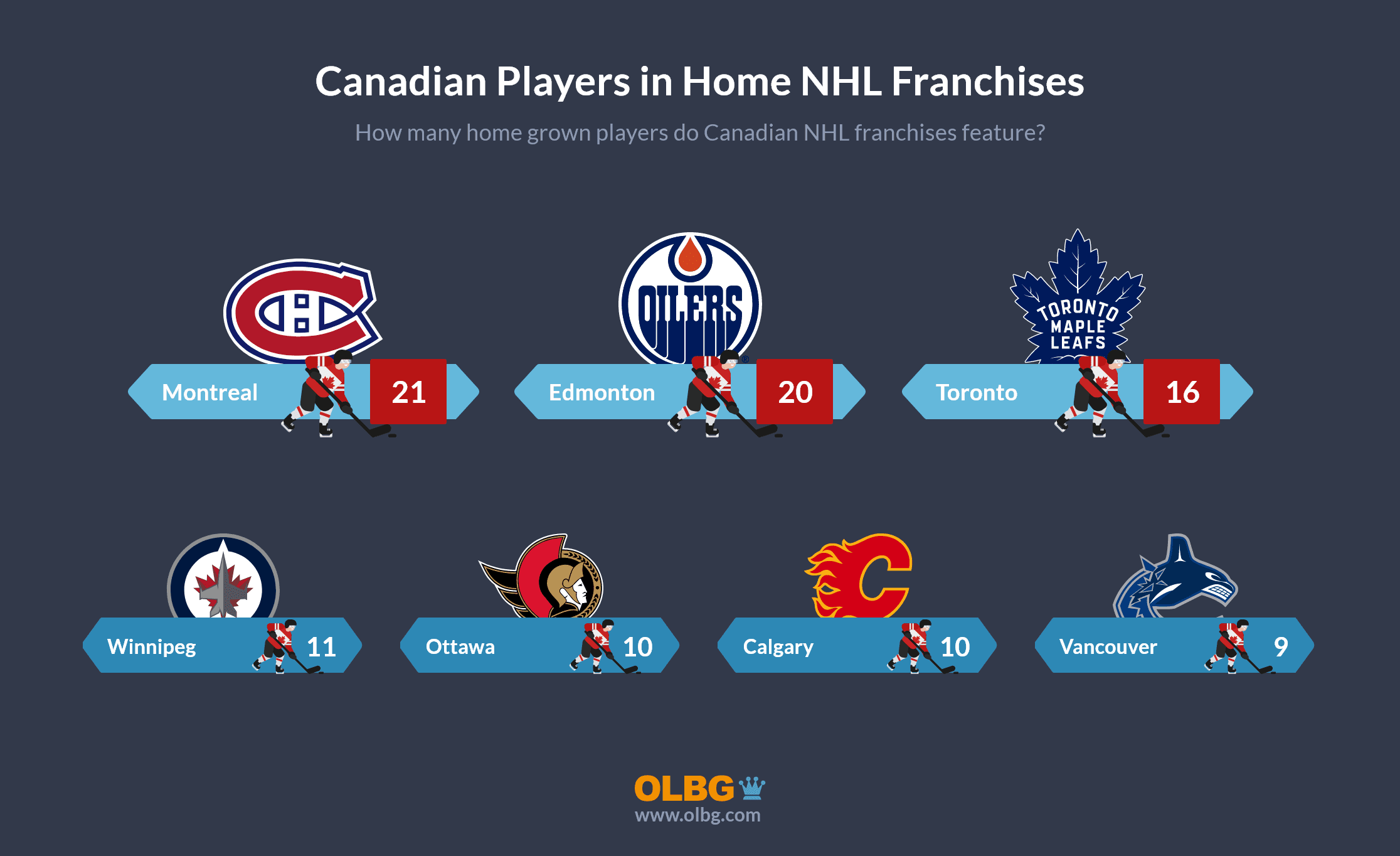 At the top of the table is the Montreal Canadiens, as they currently have 22 Canadian players on their roster and hot on their heels are the Edmonton Oilers, as they are one short at 21. With two Canadian franchises topping the standings, it is the Las Vegas Golden Knights in third.

The Golden Knights are the American franchise that offers a home to the most Canadian players at the time of writing. No less than 20 are currently residing in the place otherwise known as Sin City and this is four more than the Toronto Maple Leafs and the St Louis Blues in fourth.

With the Boston Bruins, Columbus Blue Jackets and New York Rangers only offering employment to six Canadian players per franchise, their focus is placed elsewhere. While this also poses one final question – what is the percent split between players at Canadian or American franchises?

Of the 364 players that are representing Canada in the NHL, 265 of those are playing across the border in the United States. While the other 99 are collecting their salary from a franchise based in the same country.

When you consider that 21% (7 from 32) of all the NHL franchises are based in Canada, there is a slight transfer of representation from here to the United States when it comes to player personnel. A figure that highlights the demand for Canadian stars.

Other Blog Articles You Will Enjoy

The 10 Most Popular Canadian Sports Stars