Exploring the teams responsible for the worst performances of top NFL and NBA players and teams.

What Teams Have Become the Biggest Hurdles of the Most Successful Offenses in the NFL and NBA?

No matter how many touchdowns you throw, yards you run, passes you catch, or baskets you score, every player and team has their struggles. Using five years of data from sports-reference.com, we’ve pulled some key information that highlights who tends to get bested against certain teams.

We’ll first look at NFL quarterbacks, identifying which ones have been running the show in recent history but also which teams they just simply cannot solve. Then, we’ll analyze other superstar offensive weapons (including basketball players) to see who’s been putting clamps on them. Lastly, franchises as a whole will be assessed in regard to who’s their biggest kryptonite.

We chose the top players in their respective leagues to do our analysis – including the top 10 QBs of the 2020 season, top 5 offensive weapons in the NFL (barring QBs) that same year, and the top 10 NBA players last season. For team-related analysis, we chose the teams based on the players that were mentioned throughout the other data sets.

Who’s Been Slinging It?

There are some notable quarterbacks listed here, but over the past several seasons, it’s been the Patrick Mahomes show. With an average QB rating of 108.5 and 2.6 touchdowns per game, the Texas Tech product has quickly become the face of the league. He’s also curated a fantastic QB rating against teams in the National Football Conference (NFC), sitting at 107.3. In fact, he additionally has the highest QB rating against a particular division, being 96.6 against NFC North teams. 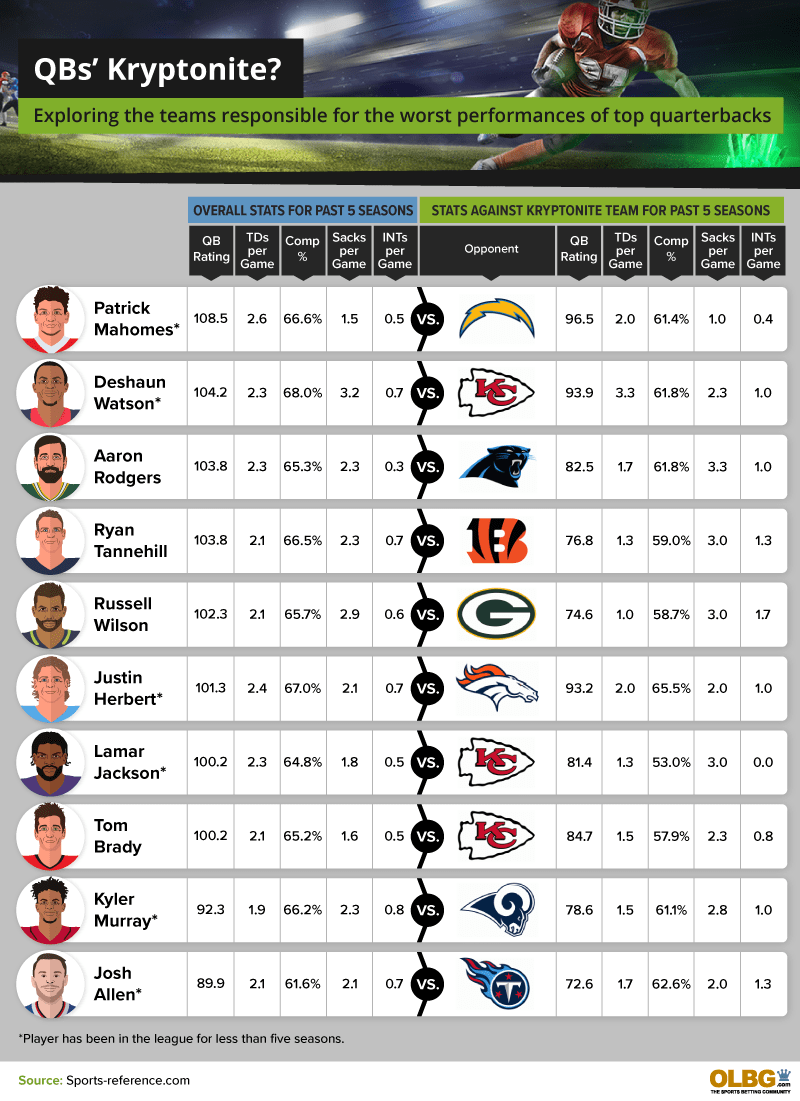 No matter how great a player, though, many tend to struggle against certain teams. In Mahomes’ case, he’s played the Los Angeles Chargers five times in the last five years with a much less exciting 96.5 QB rating and two touchdowns per game average.

Deshaun Watson was slinging it last year, too. In his past four seasons in the league, he threw 2.3 touchdowns per game and had the highest completion percentage (68%), compared to every other QB in the league. Interestingly, he struggled the most against Mahomes’ team, the Kansas City Chiefs. While he did throw for more touchdowns when playing them, his accuracy dropped heavily. Although a superstar talent, Deshaun’s off-field legal troubles have put his football future in jeopardy.

Moving away from the quarterback position, let’s see which other offensive weapons have dominated the league in recent history. By a large margin, running back Alvin Kamara has racked up the most yardage on a game-by-game basis, averaging 102.7 per outage. He’s also been scoring touchdowns at the most rapid pace, averaging one per game. The Atlanta Falcons defensive coordinators are able to effectively lock him down, though, as Kamara has only managed to find 88.1 yards and a measly 0.3 touchdowns per game in his last eight versus his division rival. Unfortunately, they’re not good at much else, seeing as they haven’t had a winning record since 2017. 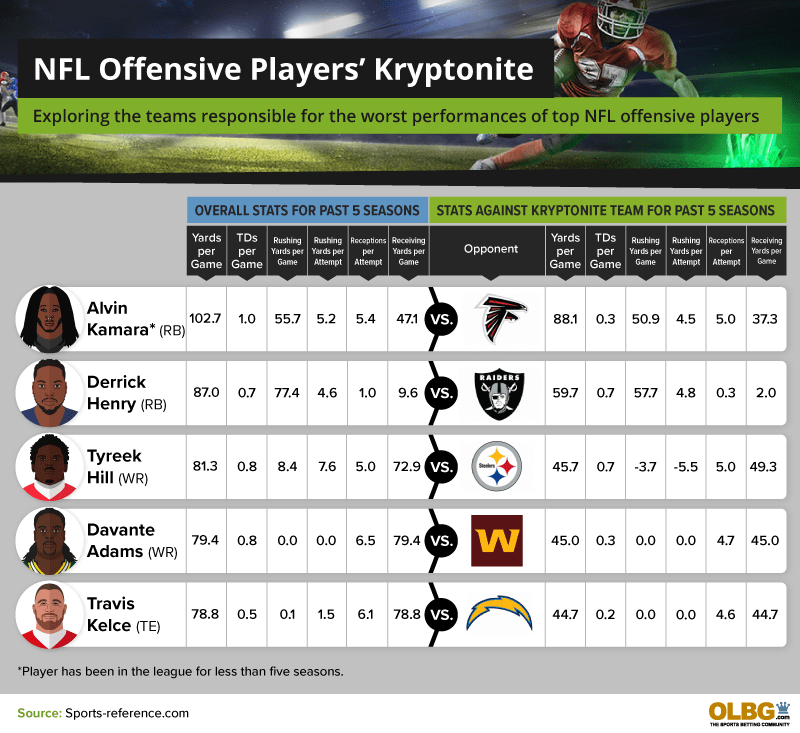 Among the top wide receivers in the game, it’s been Green Bay Packers superstar Davante Adams who’s collected the most receiving yards and receptions per game over the last five years. He and longtime Packers quarterback Aaron Rodgers have developed some of the best chemistry the league has ever seen, but the magic seems to run out when up against the Washington Football Team.

Taking a step back and looking at a given team’s kryptonite instead of a single player, the Los Angeles Rams have been a major thorn in the side of the Arizona Cardinals. They have the biggest point differential at -126, meaning that in the 10 games they’ve played over the last five seasons, the Rams have scored 126 more points. The tide might be shifting, though, as the Cardinals just beat them in their latest matchup. 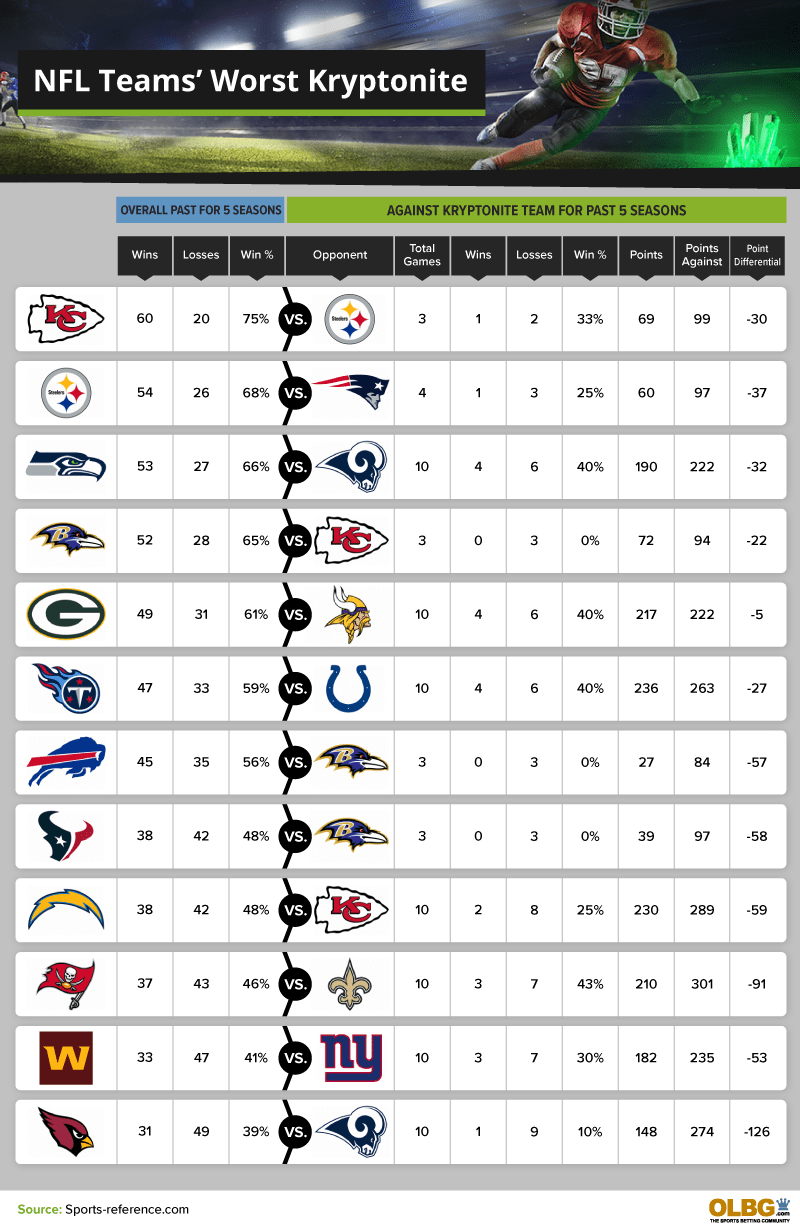 The second biggest struggle goes to the Tampa Bay Buccaneers, who trail by a total of 91 points in their last 10 clashes with the New Orleans Saints. The Florida-based team had struggled for a handful of years with quarterback Jameis Winston under center – he could sling the ball, but he was also notorious for throwing interceptions. In fact, he’s the first to ever throw for 30 touchdowns and 30 interceptions in a season. Now, with Tom Brady at the helm, the Buccaneers have looked nearly unstoppable, even winning a Super Bowl in the 2020 season. Funnily enough, Winston now plays for the Saints, who have looked hot and cold with him at the helm.

Switching over to basketball, James Harden has been the most prolific shooter in the league over the last handful of seasons, averaging a whopping 30.9 points per game. Meanwhile, Giannis Antetokounmpo has been the most accurate from the field, Steph Curry is the 3-point king, and Joel Embiid absorbs the most rebounds. Embiid has also averaged 24.8 points per game, but he has struggled tremendously against the Memphis Grizzlies, posting a lowly 13.3 points per game in the six encounters they’ve had. 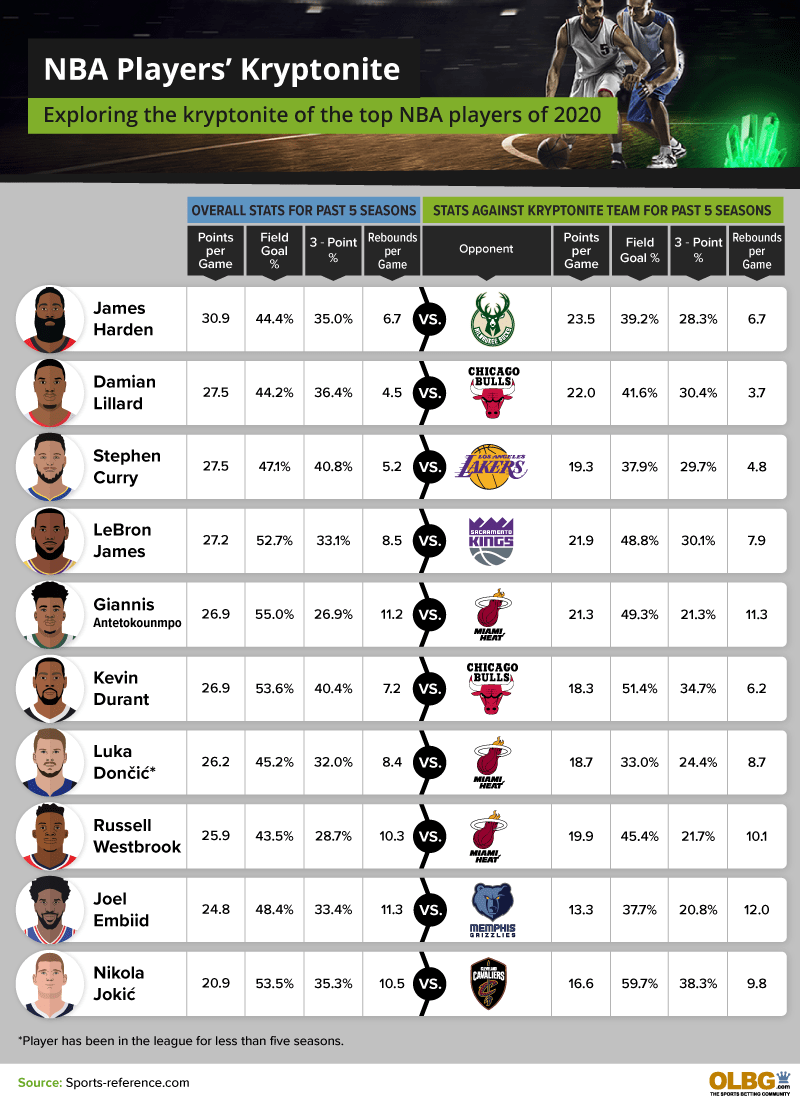 While LeBron James hasn’t led in any of these categories for a while, he’s still an undisputed top player in the league. Unfortunately for him, the Sacramento Kings have been especially efficient at shutting him down, which is impressive considering the fact that they haven’t had a winning record since the 2005-06 season!

In the NBA, no team has struggled more with an opponent than the Brooklyn Nets against the Toronto Raptors. In the 23 games they’ve played over the last 5 seasons, the Nets have only secured three wins, and have been outscored by 233 points. Although slightly embarrassing, this stat is relatively inconsequential for the Nets, seeing as they are now the favourites to win this upcoming season’s championship. 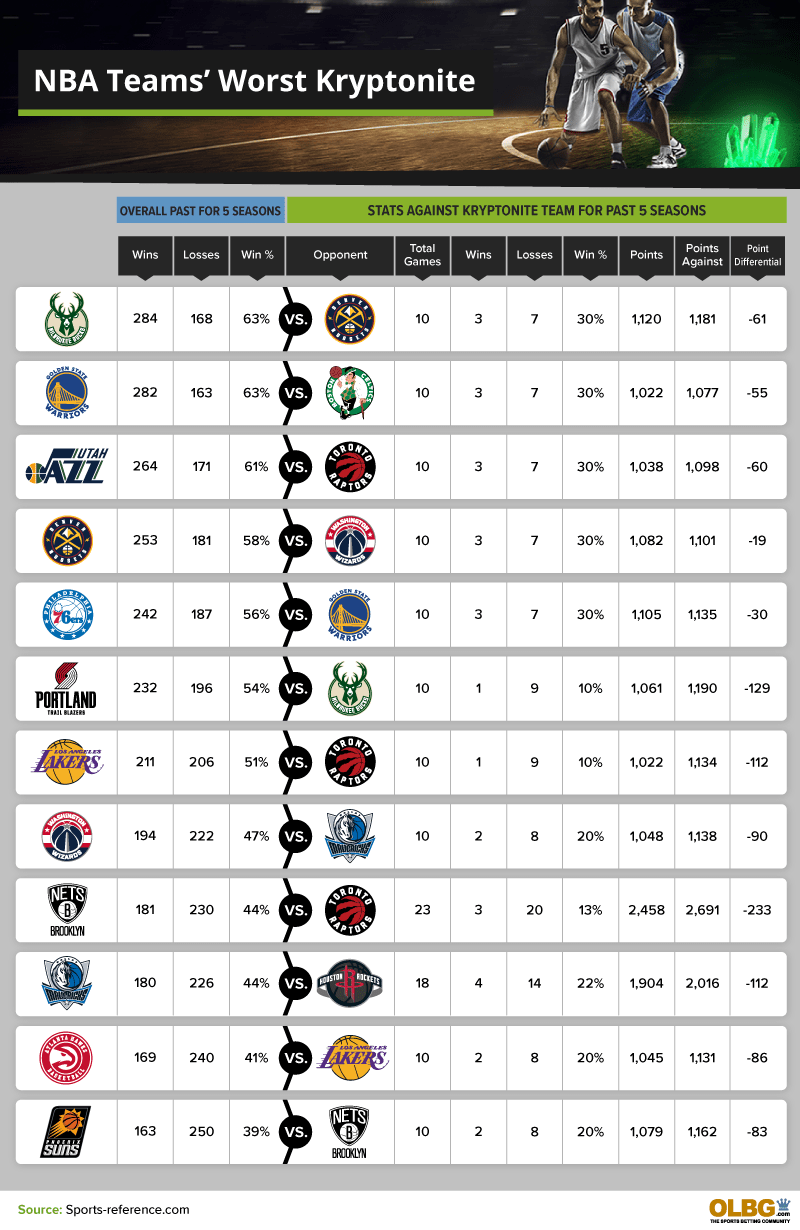 Other noticeable teams who are down more than 100 points versus their opponents in the last 10 games or more include the Trail Blazers, Lakers (also versus the Raptors!), and the Dallas Mavericks. Although there’s a sizable gap between these teams and their opponents, no one comes close to the discrepancy between Brooklyn and Toronto.

Their Struggle, Your Gain

Over the last few years, Patrick Mahomes has been the most dominant quarterback in the league, posting the highest QB rating and touchdowns per game. Other offensive weapons like running back Alvin Kamara and wide receiver Davante Adams are also the best at their craft, but all three players have faced teams before where they simply don’t get the same production that they’re used to. The same can be said about NBA greats like James Harden and possible GOAT Lebron James, while some franchises have historically been awful against certain teams.

When the Arizona Cardinals play the L.A. Rams, and the Brooklyn Nets line up against the Toronto Raptors, you’d be smart to bet against them. While these head-to-heads are gimmes, many sports game outcomes are hard to predict. To learn more about the world of sports betting and make more informed choices, head over now to olbg.com to bet as confidently as you would with the above-mentioned matchups.

For this project, we collected data from the past five seasons of the NFL and NBA from sports-reference.com to explore which teams are responsible for top athletes’ worst performances. The players in this study were the top 10 players of the past season for their respective leagues. The lists of players were sourced from the following:

The numbers in this study reflect each player and team’s overall performance and their performance when facing their kryptonite teams in the past five seasons. We only analyzed the games where each player started.

We analyzed at least three games played against the team responsible for their worst performance for each player. We analyzed at least two games in Justin Herbert’s case, since the 2020 NFL season was his first. The following players in this study have been in their respective leagues for less than five seasons:

If you see that your friend’s favorite player or team struggles against one of your favorite players or teams, now’s the time to rub it in. Otherwise, feel free to share this article with anyone who you think might get a kick out of it. We just ask that you do so for noncommercial use only and provide a link back to the original page so contributors can earn credit for their work.

OLBG is a sports betting community whose users help each other to find the best bets and the sportsbooks  to place them at. If you are interested in opening a new online betting account then you may want to check out the latest free bets. For those who like to try their luck at the casino, OLBG also has lists for the best UK casino sites with designated sections for NJ online casinos, PA casino sites and Michigan online casinos.

Rise of Sports Betting in The USA

Jun 23, 08:51am
By using this site you confirm you are 18+ and consent to our use of cookies and processing of personal data as set out in our Privacy Policy
Got it!